The winter Cafe Muse programs are always a risk but The Word Works was very lucky to have the Friendship Heights Village Center open for business to host American University professor David Keplinger and on-sabbitcal Chicagan Bill Yarrow. Bill took the train two nights before his February 2nd appearance, making it out before one of the five worst storms in history to hit Chicago. We had blustery frigid wind in the DC area but that did not keep 40 people from attending.

Henry Crawford introduced David expressing the great love his students have for this vivacious teacher. Many of his adult students were attending. Gwenn Gebhard, a departing Cafe Muse co-host, introduced Bill Yarrow with a poignant and on-the-money preview of Bill's work. Rocky Delaplaine ran our open mic for poetry. Although Susan Okie was absent, her work behind the scenes was keenly felt—she succeeded in getting this program listed in The Washington Post Literary Calendar two weeks in a row, news that always brings in new and regular-attending audience.

Our next program on March 2 features poets Le Hinton and Susan Sonde.

The Word Works thanks Courtyard by Marriott for hosting our reader Bill Yarrow. Thanks to Bill Yarrow for the high-quality video linked above.

News from the HTCC imprint 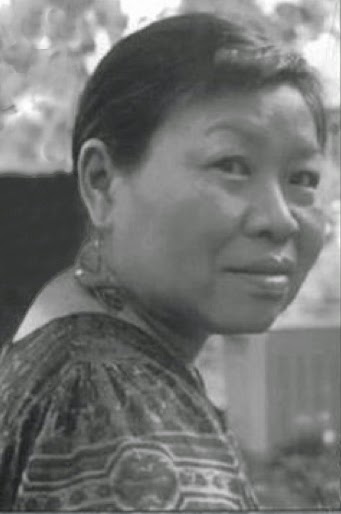 Today we are pleased to announce that judge Michael Klein has selected manuscripts for publication in the HTCC imprint by Barbara Louise Ungar and Joseph Zealberg. We will have further information soon on our website. Congratulations to these fine poets.

Posted by Karren Alenier at 9:21 AM No comments:

Sometimes we, as a literary community, do not know the treasures that surround us.

Take for example the February 3, 2014, Café Muse readings by poet mathematician JoAnne Growney and poet interactive hypermedia "physicist"  Stephanie Strickland. They both brought to the lit table a wider reach of our world.

And not only did they offer up a different complexity shaped by the writer’s primary tool—words, but also they framed an energy that brought out some exciting participants to the Café Muse open mic, like Mary-Sherman Willis who recently presented in our forum from her new cross-genre book Graffiti Calculus. 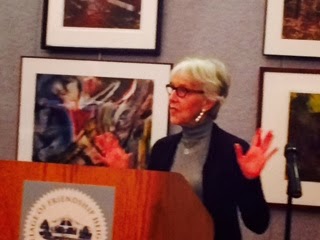 Here is a poem from JoAnne Growney that is done in a syllabic square. About this form JoAnne says, “One of the poem-forms I use frequently is the square, a form going back at least to 1597, the date for a square poem by Henry Lok, honoring Elizabeth 1.  The square form (a single-stanza in which the number of lines is the same as the number of syllables per line) seems to help to shape a pithy statement.”

This square by JoAnne has six syllables per line and is  six-line poem:

More than the rapist, fear
the district attorney,
smiling for the camera,
saying that thirty-six
sex crimes per year is a
manageable number. 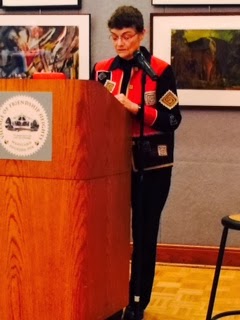 Reading from her latest book Dragon Logic, Stephanie Strickland, serves as prophetic voice against the void created by the virtual reality of the Internet that detaches its users from each other. She shows how the past is not so different from the future and that we have always lived with human consuming dragons. 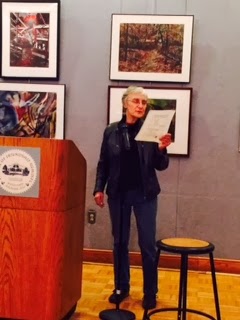 Join us at Café Muse on March 3 for readings by poets Margaret Mackinnon and Dennis Kirschbaum.

Posted by Karren Alenier at 10:49 AM No comments:

Leslie read this poem of the supernatural: 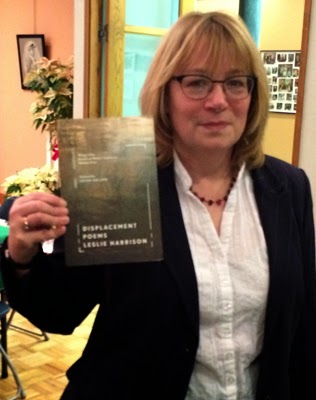 HOW I BECAME A GHOST

It was all about objects, their objections
expressed through a certain solidity.

My house for example still moves
through me, moves me.
When I tried to reverse the process
I kept dropping things, kept finding myself
in the basement.

Windows became more than
usually problematic.
I wanted to break them
which didn’t work, though for awhile

I had more success with the lake.

The phone worked for a long time
though when I answered
often nobody was there.

Bats crashed into me at night,
but then didn’t anymore.

The rings vanished from my hand,
the pond.

I stopped feeling the wind.

One day the closets were empty.

Another day the mirrors were.

from Displacement Poems, winner of 2008 The Bakeless Prize 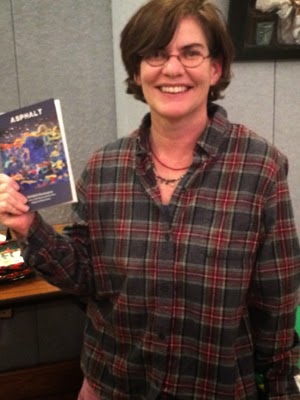 Rebekah read this poem about the earthquake that damaged the National Cathedral:

Great Aunt Mary said, “I think we should we should go.”

Outside, the sun reigned.
The sand was as usual. Striped umbrellas.
Women in tankinis, their happy and unhappy bodies,
walking along, and the ocean liners far off, all unshaken.

Later we bought a six pack and a bag of groceries.
Did you feel it? a stranger in line asked.

The National Cathedral, a place I have visited only twice,
lost three pinnacles off its central tower.

What else? Nothing else, or this:
the bees come, the apples.

In September my son writes an essay called “Brave Boy,”
and the teacher calls his handwriting sloppy.

The vagabond stands on the green island,
and the light changes.

Why do the bees sound so happy this year?
Why are the houses all awake,
shining lights even in daylight?

When I stand in the white glow of the refrigeration zone
in Paradise Liquors it’s the names I love:

Something for the afternoon, when the children
mine for virtual diamonds.
How do I get a pickaxe?
Press B.

The bees come. The apples. 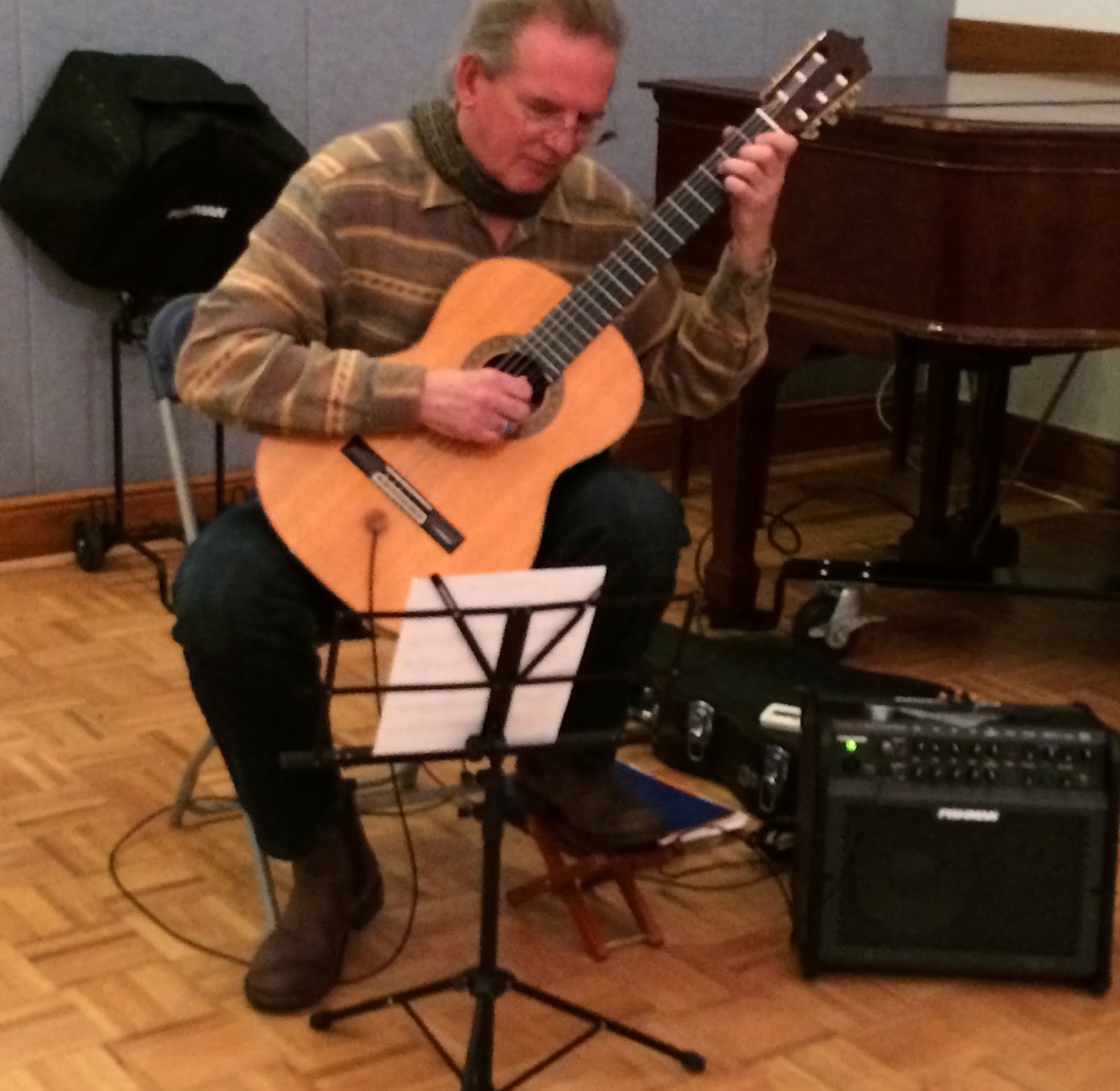 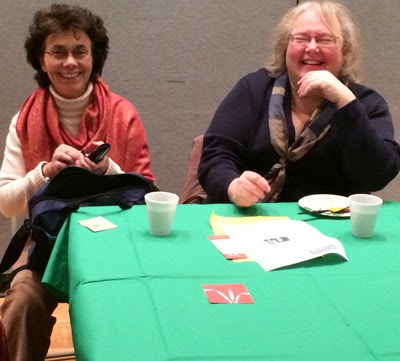 Posted by Karren Alenier at 2:18 PM No comments:

Quite the crowd gathered for our Café Muse poetry reading on December 2nd. We enjoyed seeing many new faces at the Friendship Heights Village! 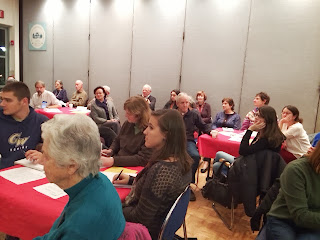 The evening began with Michael Davis's graceful guitar performance, setting the tone for a thoughtful night. 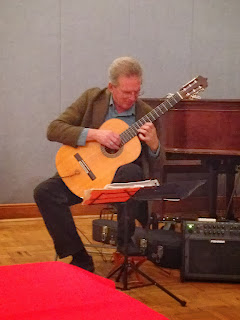 Our first featured reader was Richard Harteis. His poetry discussed the "slow progress" of his grieving over the late William Meredith, mixing ordinary details of life with profound grief and questions. It also focused on his late dog, Daisy, his young students' reactions to the Newtown massacre, and several other topics. It was human, accessible, and quite sincere. 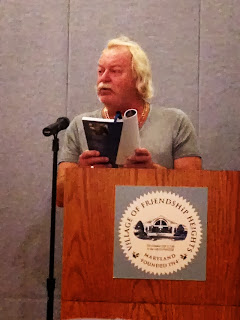 Our second featured reader was Mary-Sherman Willis. Her poetry focused on her relationship with her son as he entered adolescence, with all the worries and paradoxes that time of life brought. It discussed her journey of following her son's graffiti tags, the significance of his name: "your name we gave you to be a part of us and apart from us," and phenomenology or object-hood as she explored the significance of his graffiti. She also creatively incorporated calculus into her musings. It was clever, touching, and insightful. 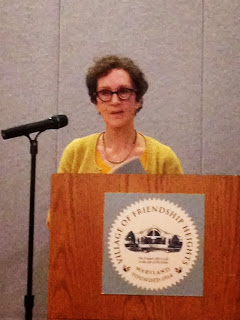 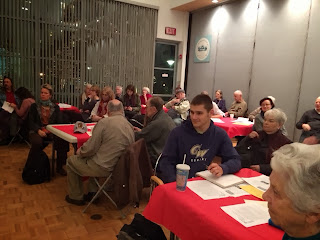 Be sure to come out for the first Café Muse of the new year on January 6th, featuring poets Leslie Harrison and Rebekah Remington!

Poetry by Hailey Leithauser and Chad Davidson at Café Muse

The evening started with our guest pianist David Uffelman playing fun, popular songs such as “Yesterday” by the Beatles and “I Dreamed a Dream” from Les Miserables. 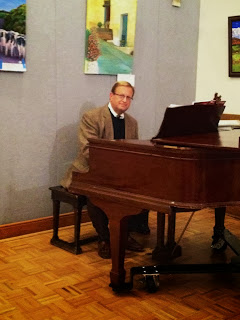 Next up was our first featured reader, Hailey Leithauser. Her poetry discussed pieces of life that were quite accessible for everyone, such as a Halloween ghost story and the cycle of seasons. The elegance combined with the simplicity in her poetry felt warmly familiar, as it nodded toward what poetry used to be and often is not anymore. She used remarkably sweet-sounding phrases such as “sea of peonies” as well as clever palindromes like “Naomi I moan.” 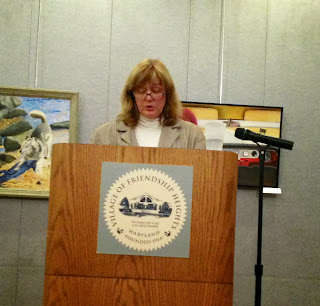 Our second featured reader was Chad Davidson. His poetry took ordinary, everyday experiences such as shopping for “my impulse buys” at Target and turned them into glorious occasions and/or commentaries on the commercialized state of America. He also switched from different times and places in one of his works, creating an intriguing perspective with Star Wars references interwoven throughout. His dry humor and charismatic expressions made his reading quite enjoyable. After the featured readings, several other people read poetry for the open mic segment of the program. We had several pieces written in unique structures for workshops and a variety of topics.

Many thanks to our featured readers and the others who read! We enjoyed the pleasant tone of the night at the start of another week. Be sure to come out for our December Café Muse event on Monday, December 2nd at 7:00 PM to hear poetry by Mary-Sherman Willis and pieces of works by novelist Halvor Aakhus!
Posted by Unknown at 12:02 PM No comments:

Friendship Heights Village Center hosted Shara Lessley and Joseph Ross for Word Works' monthly Cafe Muse poetry reading on Monday, October 7th. It always strikes me that Cafe Muse feels like a retreat from the outside world into an environment of calm meaningfulness as we listen to words written and spoken in new ways. 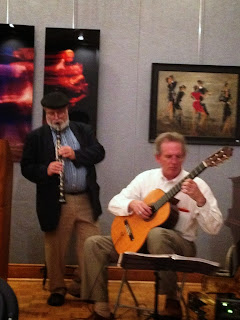 The first featured poet of the night was Shara Lessley. Her poetry spanned from the everyday to her experiences in Jordan to what it felt like to return to the States after being gone for three years. It was easy to picture what she was describing in her poetry; we took a piece of her journey with us on hearing her descriptions. 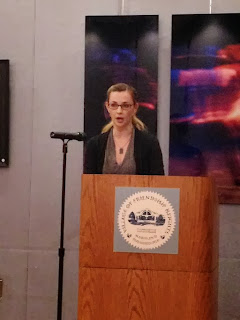 The second featured poet was Joseph Ross. His work depicted important historical events such as Rosa Parks refusing to give up her bus seat and the bombing of a New Orleans church that killed 32 people, as well as the story of a graffiti artist. After each poem Joseph read, it seemed that everyone in the audience raised their eyebrows and sighed audibly in response to the intensity of his words and passion. 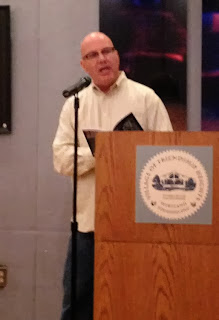 After the readings by our featured poets, several others read. One person who read, the remarkable Paul Grayson, had just celebrated his 95th birthday! We celebrated with him, enjoying pumpkin cake made by Lois McBride in his honor. 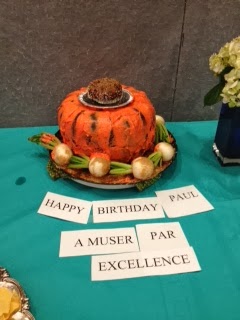 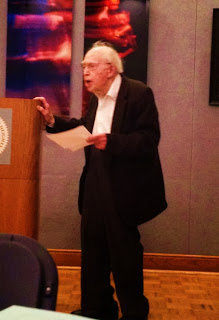 Thanks so much to our featured readers and the others who read! We appreciated another haven of poetry. Be sure to come out for our November Cafe Muse event on Monday, November 4th at 7:00 PM to hear poetry by Hailey Leithauser and Chad Davidson! 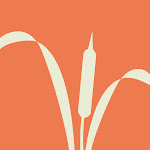